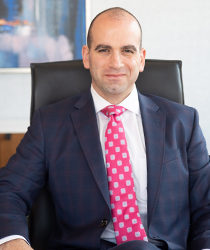 After receiving his Bachelor of Arts from the University of North Carolina at Chapel Hill, John Paul Tsahakis spent a year abroad working in Greece, the birthplace of three of his four grandparents. He returned to Chapel Hill in 2006 to earn his Juris Doctor at the University of North Carolina School of Law, where he was an active member of the Holderness Moot Court Bench. In 2009, John Paul had the honor of competing in the National Environmental Moot Court Competition in New York.

Raised in Charlotte, John Paul graduated from Charlotte Latin School in 2001. He moved back to Charlotte directly following law school at UNC to join James, McElroy & Diehl, P.A. (JMD) in September of 2009. John Paul became a partner in the firm in 2014. At JMD, John Paul has always focused his practice on issues relating to child custody, child support, spousal support (post separation support and alimony), equitable distribution, and domestic violence. With over a decade of trial experience, John Paul has participated in the resolution of a multitude of domestic disputes as lead counsel, both through the intervention of the court system and by way of the mediation process.

John Paul believes strongly in approaching each and every case with true collaboration with his client to arrive at the most effective strategy aimed at full and complete resolution of the dispute. He deeply enjoys preparing and presenting his clients’ cases, regardless of whether it is before a judge, arbitrator, or mediator. John Paul is AV® Preeminent™ Peer Reviewed rated by Martindale-Hubbell, and he has been recognized multiple times by Best Lawyers® “The Best Lawyers in America” and Business North Carolina’s Legal Elite for his work in family law.

Outside of work, John Paul enjoys spending time with his wife and children, as well as his large extended family. He and his family are members of both Holy Trinity Greek Orthodox Cathedral and St. Nektarios Greek Orthodox Church. In addition to cheering on the Tar Heels in all sports, the Tsahakis family follows the Carolina Panthers with keen interest.